I had hypertension - Ola of Big brother reveals 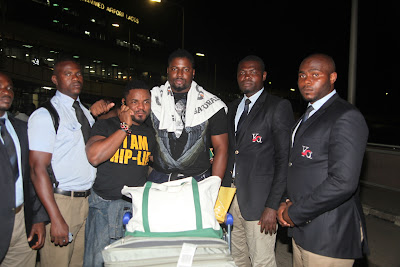 Immediately I heard Ola and Chis were returning yesterday, I dropped all I was doing and dashed off to the airport. But the hold up at Mobolaji Bank Anthony way could not let me get to the arrival of MMA on time. With several calls to MNET, I was able to have a brief chat with the two this afternoon.
The duo were all bubbly and full of life. You would not know that they had just gave up the chance to win N45,000,000. It was more than normal. It was more like the demeanor of two young men who has resigned to faith. Looking very closely at Ola, you could see underneath his "it is no big deal" attitude, there was a deep concern there. In the chat that ensued, I found out his greatest worry.
(read on for more)

In Big brother Africa this year, if a person leaves the house, his or her partner has to follow suit. Ola was not happy that his good friend, Chris had to suffer with him. "I thank Chris for his understanding. We had a great chance of winning. When I told him I ha had to leave, I was in tears. He understood. and he just accepted."
So what was Ola's ailment all about. He and Chris both had to leave the house because Ola said he could not continue due to health issues. Ola revealed exclusively to me (he will surely do so to other mediums in days to come) that he was diagnosed with High blood pressure, and he was hypertensive. "I never even knew I had such. It was when I went for medical check up in the house that they told me I was hypertensive. I had to make a choice. What if I stay and win the show, and then slump and die when the cheque is being given to me on stage. I had to be wise. Though it came at a price. Chris had to come with me," Ola said.
Chris on his part was cool calm and collected. wearing a brown suit and a white shirt, he did not look like the naughty Chris that lay bear his sexy(??) chest on TV. He was more philosophical in his approach. He believes that everything is for a reason. He believes that his friend's life was more important than any money in the world. "He is a foolish boy, but he is my friend. His life is more important than any money" Chris said.
The two agrees that it is not the last Nigeria and Africa will be hearing from them. They say that they are in talks with MNET, to see the possibility of a reality show on both of them.
Despite their loss, Ola and Chris did make their mark in the Big Brother house. They were and are in real life strong characters, and still have a lot to offer. Most of all, they in unison agreed they had a good time in the house.