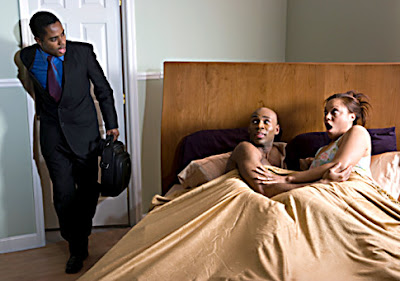 47-year-old man, Andrew Amonu, whose wife filed a divorce suit against at an Oshodi Grade ‘B’ Court, Lagos on Wednesday, told the court that he had on several occasions entertained his wife’s lover in error.
He said he took the man whom he knew through his wife, Ada, as a well wisher not knowing that he was secretly going out with her.
Andrew’s marriage to 37-year-old Ada is being threatened by a disagreement over the ownership of three chemists which they both claimed they established.
Andrew had told the court that Ada used one of her numerous boyfriends – a military officer- to publicly assault and threaten him to stay clear of his three chemists which he said was worth N11m.

Andrew lamented that Ada had the guts to bring her man friend to their matrimonial home.
He said, “My wife is seeking divorce in order to enjoy my investment with one of her man friends, Henry, who is a very old man compared to me.
“Whenever she brings Henry into my home or my places of business I would entertain him because of my hospitality and kind heart.
“However, his visits became more frequent, I started suspecting foul play. I confronted my wife on this but she denied it.
“When I was in incarceration at the Kirikiri Prisons after she instituted criminal charges against me, she brought this old man to sleep with her in my own house.
“This information was all over when I got back after perfecting my bail. I was so ashamed of myself. She is such a callous and unfaithful woman.”
Andrew also described his estranged wife as wasteful, adding that she wanted to squander his investment with her man friend.
He said, “I enrolled her for part-time studies at the University of Lagos to earn a degree in Accounting but surprisingly she dropped out in the fourth year.
“All the fees I paid went down the drain like that. That’s the way she lives her life.”
The acting Court President, Mrs. R.I. Adetola, urged their lawyers, Mr. A.E.Lawal, and B.C. Ferguson, representing Ada and Andrew respectively to seek an amicable solution to the couple’s disagreement.
Adetola said,” There is no problem that is actually too difficult to solve. I urge the counsel to passionately intervene in the matter in the interest of the four children the marriage is blessed with.”
Adetola ordered Ada to grant Andrew unrestricted access to the children.
She also invited the parties for another round of counselling on May 14 and adjourned the case till June 11 for further hearing.
Posted by Unknown at 02:17